74 injured, four critically, as another train derails in UP

August 23, 2017
latestnews1947:  At least 74 persons were injured when 12 coaches of the Kaifiyat Express derailed on Wednesday morning in Auraiya district in the second such accident in Uttar Pradesh in five days, authorities said.
The incident took place when the New Delhi-bound train from Azamgarh in Uttar Pradesh hit a dumper which had overturned on the rail tracks between Achalda and Pata stations around 2.40 a.m., a railway official said.Four of the passengers suffered serious head injuries and were rushed to a hospital in Etawah, police said. They remained in critical condition till evening. 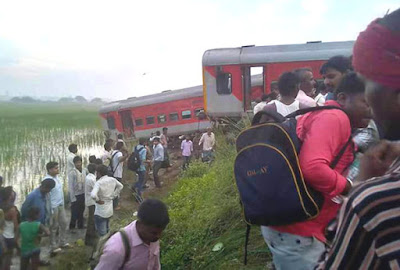 The dumper was ferrying sand for a dedicated railway freight corridor running parallel to the track, Inspector General of Police (Kanpur Zone) Alok Singh told IANS.But officials in Delhi disputed this version."The train hit an unknown dumper. The dumper does not belong to the Dedicated Freight Corridor Corp of India Ltd or its contractor," its Deputy General Manager Rajesh Khare told IANS.Besides the engine, 12 coaches of the train ran off the tracks including five air-conditioned coaches, two sleeper coaches, four general class coaches and a Seating-cum-Luggage Rake.One of the coaches overturned because of the impact of the crash.Mercifully, no one died in the disaster. Some railway officials attributed this to the quality of the LHB coaches.By Wednesday evening, 39 males and nine females remained warded in hospitals. The accident forced the railways to cancel seven trains and divert 40 others from the busy route. A North-Central Railway official told IANS that the tracks were expected to be restored by Thursday morning.This is the second train accident in Uttar Pradesh since 14 coaches of Kalinga Utkal Express derailed in Muzaffarnagar district on Saturday evening, leaving 22 dead and over 150 injured.The Saturday disaster led to the suspension of four railway engineers. Three senior officials were sent on forced leave and another officer was transferred.On Wednesday, the government replaced Railway Board Chairman A.K. Mittal with Air India chief Ashwani Lohani.Simultaneously, Railway Minister Suresh Prabhu accepted "moral responsibility" for the Saturday accident and deaths and offered to resign. Prime Minister Narendra Modi asked him to "wait".