August 27, 2017
latestnews1947: The Netherlands men's team captured the gold medal at the European Championships, defeating Belgium 4-2 in the final on Sunday.
In the men's final, Belgium, who had beaten the Dutch 5-0 in the group phase, came 2-0 in front through Tom Boon and Cedric Charlier. But the home team bounced back through goals by Robbert Kemperman, Mirco Pruyser, Mink van der Weerden and a last second goal by Pruyser, reports Xinhua news agency. 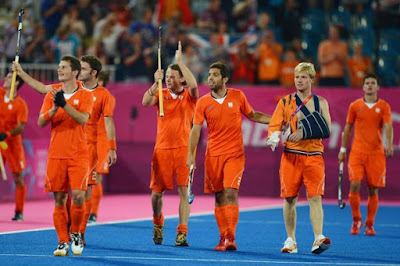 The 4-2 victory meant the 5th European title in 16 editions of the tournament for the Dutch. Two years ago in London they were also victorious.On Saturday, the Dutch women beat their Belgian counterparts 3-0 in the final. Carlien Dirkse van den Heuvel opened with a goal the first quarter and Kelly Jonker and Ireen van de Assem extended the scoring.It was the ninth European title for the Dutch women in 13 editions. The last title dated back to 2011. Germany and England won the last two tournaments in 2013 and 2015, respectively.
Location: Amsterdam, Netherlands