At least 5 die from Hurricane Harvey in Houston

August 27, 2017
latestnews1947: Hurricane Harvey, now weakened to a tropical storm, left at least five people dead and dozens injured as it swept through Houston, Texas, the National Weather Service (NWS) said on Sunday.
Authorities fear that the torrential rains will cause major floods from the rivers that flow through Houston, the fourth largest city in the United States with a population of 2 million, Efe reported.Though the NWS speaks of five people killed, the Sheriff's Office in Harris County, where Houston is located, could only confirm one fatality.The Miami-based National Hurricane Center (NHC) said that while Harvey has maximum sustained winds of 65 kph (40 mph), the continued torrential rains make it as dangerous as a hurricane. 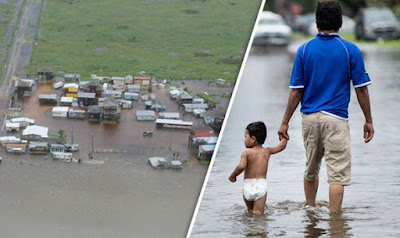 The NWS said the eye of the Harvey is now 55 km east-southeast of San Antonio.Texas Governor Greg Abbott said Sunday that the helicopters of emergency management teams are carrying out rescue missions in the Houston and east Texas areas.Harvey, which made landfall Friday night in Texas as a Category 4 hurricane, is scarcely moving at 2 kph in a south-southeasterly direction, which only increases its destructive power against everything in its path.Harvey, the most powerful hurricane to hit the United States in 12 years, first made landfall in Rockport, located northeast of Corpus Christi, at 10:00 pm Friday with maximum sustained winds of 215 kph.President Donald Trump said Sunday he will visit the affected areas of Texas as soon as possible.