August 23, 2017
latestnews1947: Ahead of the CBI court verdict which is likely this week in a rape case against Dera Sacha Sauda sect chief Gurmeet Ram Rahim Singh, the central government has provided "requisite" assistance to Haryana and Punjab to maintain law and order."The Home Ministry has discussed the issue with both the states (Haryana and Punjab) and has provided requisite assistance," sources in the Home Ministry here said. The official did not elaborate about the exact central assistance provided to the states but said over 100 companies of paramilitary forces have already been given to Haryana and Punjab jointly as well as intelligence support to maintain law and order measures and handle any unprecedented situation. 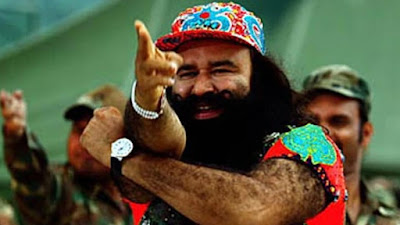 The central government's step came after top officials of Punjab and Haryana last week apprised the Home Ministry of the situation in the two states ahead of the impending verdict of a Central Bureau of Investigation (CBI) special court in Haryana's Panchkula city adjoining Chandigarh, which has been hearing the case since 2007.The Home Ministry sources said the states were provided helping hand from the central government after its officials sought central forces in case the CBI court's verdict went against the sect chief. Authorities in Punjab and Haryana had already asked police in both states to be on alert ahead of the verdict.The sect chief, who has lakhs of followers in Punjab, Haryana and other states, has been accused by a former female follower of raping her more than once inside the sprawling Dera campus on the outskirts of Sirsa town in Haryana, 260 km from Chandigarh.Despite charges of murder, conspiracy, and rape against him, the Dera chief enjoys Z-category security provided by Haryana Police and moves around in a fleet of bulletproof luxury sport utility vehicles.Anti-social elements or any other person who would try to disturb law and order would be arrested, police sources in both the states said, adding that leave of police personnel has been cancelled and home guards would be called on duty."All borders of the state have been sealed and inter-state and inter-district activities of vehicles are being closely monitored," the official said.