August 25, 2017
latestnews1947: Sebastian Gorka, an outspoken and combative defender of President Donald Trump's national security agenda, has been forced out of his position as a White House counter-terrorism adviser, the media reported,

According to two administrative officials, the news came in on Friday night, reports The New York Times.
Gorka, 46, had been on vacation for at least the last two weeks, the officials said on the condition of anonymity.
The Federalist, a conservative website, published portions of what it called a resignation letter written by Gorka. It quoted him as saying that given which "forces" were on the rise in the White House, the best way for him to support the President was from outside it. 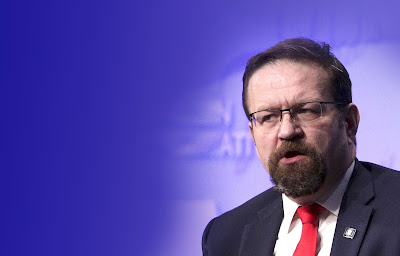 In response, the White House put out an unattributed statement saying that he no longer works in the administration, but that he did not resign.
Gorka's work for Trump goes back as far as 2015; Federal Election Commission filings showed that he was paid $8,000 that October to be a policy consultant for the Trump campaign, reports CNN.
Gorka also was a member of the White House's Strategic Initiatives Group, which he described as a focal point for task forces collaborating with people outside government.
His resignation adds to a long list of high-profile departures from the White House, including chief strategist Steve Bannon, chief of staff Reince Priebus and press secretary Sean Spicer.
Gorka has also been a vocal defender of the Trump administration's efforts to temporarily ban travel from some predominantly Muslim countries; he has said violence is a fundamental part of Islam and emanates from the language of the Quran; and his hard-line views on Islam have prompted his critics to accuse him of Islamophobia, reports The New York Times.
He has also been accused of having links to far-right groups in Europe. He is a former editor at Breitbart News, and a friend of Bannon, who has now rejoined the right-wing website as executive chairman.
An American citizen who was born in Britain to Hungarian parents, Gorka made a habit of assailing the news media for its coverage of Trump, insisting that reports of turmoil in the White House had "almost no resemblance to reality".
Location: Washington, USA