August 22, 2017
latestnews1947 Rescuers on Tuesday pulled alive from rubble a 7-year-old boy and were working to reach his 11-year-old brother after their home on the resort island of Ischia off Naples was flattened by a magnitude 4 earthquake that left two women dead and 39 injured.
The rescued boy, named Mattias, was put on a stretcher and taken to hospital covered in cement dust and wearing just his underwear, thirteen hours after the temblor struck at 9 p.m. local time on Monday, destroying the family's home in the village of Casamicciola."Mattias has been rescued. We are working non-stop to pull out Ciro," Italian fire brigade tweeted, referring to the boy's older brother. 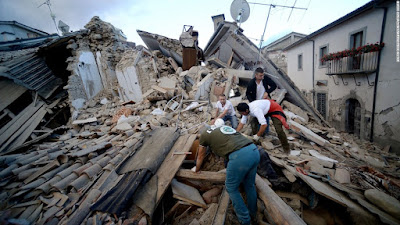 The two brothers survived in an air pocket under the rubble after they sheltered under their bunk beds when the house began to collapse and rescuers managed to lower bottles of water and a flashlight down to them.Firemen at 4 a.m. rescued the boys' seven-month-old brother, Pasquale, to loud cheers from crowds of onlookers. The boys' mother, who is reportedly pregnant, managed to escape through a window when the quake struck while their father was pulled out from beneath masonry soon afterwards. The undersea quake killed at least two women and injured 39. It left 2,000 people homeless in Casamicciola and a further 600 in Lacco Ameno. Most of the damage was in the high part of the volcanic island, with hotels and residences on the coast not appearing to suffer serious damage. However, many holidaymakers headed to the island's ports on Tuesday after deciding to return hom early.Some 90 per cent of houses in Casamicciola have been constructed illegally on terrain prone to landslides, according to Naples daily Il Mattino. Around six buildings collapsed in the village as well as its church, television images showed.One of the quake victims, a 74-year-old woman, died when she was hit by falling masonry from the church in Casamicciola, while a second woman died when her home was flattened.